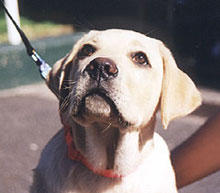 "His hair, his size, his mouth, his lugs Shew's he was nane o' Scotland's dogs But whelpet someplace far abroad, Where sailors gang to fish for cod. "
Robert Bums

Roughly translated, this description by the renown Scottish poet says that the hair, size, mouth and ears of the Labrador show that it was not a Scottish breed but originated abroad as a fisherman's dog.

The origins of the Labrador are rather obscure but two types of dog were known in Newfoundland - a large heavy dog used to pull boats into land and a lighter, smoother coated variety used by fisherman to retrieve game and fish. They were both known as Newfoundland dogs and it was not until 1812 that the larger breed was known as Newfoundlands, and the smaller as the lesser Newfoundland or Labrador. In 1814 Labradors were taken to England where, in a book "Instructions to Young Sportsmen", the breed was described as "by far the best for every kind of shooting" and in fact all who came into contact with him sang his praises. 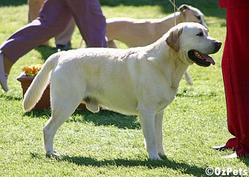 Very quick to learn, eager to please and a manageable size with an easy care coat, today the Labrador is one of the most popular breeds throughout the world and it is said that once a Labrador gets hold of your heart it will not let you escape.

An adaptable and devoted companion with a kindly nature Labradors easily adopt the role of children's playmate or elderly persons pet.

The keenness to learn and willingness to please make the Labrador an ideal choice as a guide dog for the blind. The puppies are placed with a family for the first twelve months of their life and then return to the Guide Dog School for an intensive training course. After graduation the dog is matched with a compatible owner and devotes itself to the safety of its owner. When working the dogs wear a harness which allows them to communicate their movements to their handler. When wearing the harness the dog assumes a responsible and serious attitude but when the harness is removed he behaves as any other well trained family pet. The guide dog learns to respond to commands to take its owner to various venues, such as the bank, or to train stations or bus stops where they will safely guide the owner on to the vehicle and then unobtrusively curl up under the seat for the journey. Guide dogs are permitted access to all public transport, including taxis, and also to shops and restaurants.

The excellent sense of smell possessed by Labradors, coupled with their eagerness and agility, makes them suitable as bomb detection or drug sniffer dogs. These dogs are trained to detect certain substances and, by their behaviour, alert their handlers. To the dog it is all one big game of "hide and seek", although in the case of bomb detection dogs they save many lives.

Although the Labrador is commonly referred to as the "golden" Labrador, the colour is officially called "yellow" and ranges from light cream through to a red fox shade. Other permissible colours are black, liver or chocolate. A small white spot on the chest is allowed. The coat is a distinctive feature - short, dense without wave or feathering and with a fairly hard feel and a weather resistant undercoat. The tail, is very thick at the base, of medium length and gradually tapering to the tip, densely coated with short, thick hair giving a characteristic "otter" MR. The head is broad with medium sized brown eyes expressing intelligence and good temper and ears hanging close to the head.